Find out more about our team and the work we do at the University of Leicester.

Here you will be able to learn about SCAD and read the stories of others who have suffered from this condition.

Our team at the Leicester Glenfield hospital is funded by BeatSCAD and from public donations and have previously received funded from the British Heart Foundation and NIHR Rare diseases Translational Research Collaboration.

Dr David Adlam is the chief investigator for our research. We aim to investigate:

We are extremely grateful to SCAD-survivors, their family and friends who have generously donated or raised funding to support our research

If you would like to contribute to SCAD research then please donate at ourjust giving page.

I am in many ways a medical anomaly. 9 months ago I suffered a Traumatic Brain Injury that should have rendered me with significant cognitive deficit or worse still serious physical impairment. However, four months later I was back operating as a Chief Executive and a few weeks later competing in a Triathlon. 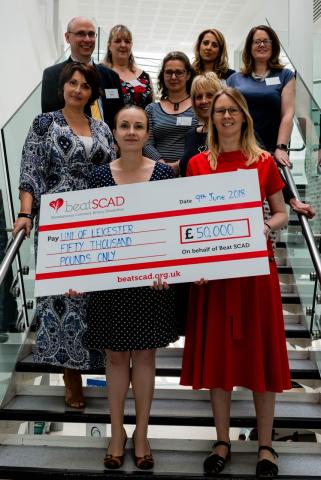 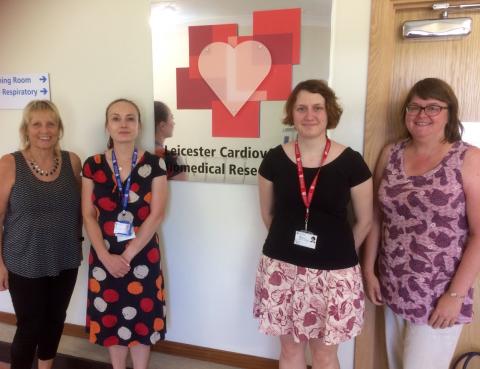 The day started as normal, I took my young children to school and caught the train to work.

I turned 31 in October 2017. Never had any health issues before. I work in an office environment and had no warning of my SCAD.

On 2 November 2017, while drying my hair getting ready for work, I had sudden crushing chest pain, a burning that travelled up to my throat and sharp pain through my back.

One day in Summer 2012 I was alone at work, staying late to finish something off. Suddenly I went all woozy and had to grab the desk to steady myself. Very quickly it passed and I finished up and went home. However, I didn’t feel well at all that evening and said to my husband that I felt like I was going down with flu as I really ached. I had an early night and in the morning I felt fine again and forgot all about it.

Then a few evenings later just after I’d got into bed I started to experience the worst acid indigestion that I’d ever had. My husband was away so I suffered in silence, eventually getting up and taking some paracetamol which seemed to get rid of it. (Even at this stage it didn’t strike me as odd that paracetamol should clear indigestion).

I was at work on a course in November 2015. I remember starting to feel sick after lunch and it kept repeating on me. I thought it was food poisoning. At around 2pm I then started to get pain across my shoulder blades – a pain I had never experienced before. I took 1g of paracetamol, and shortly afterwards I started feeling like there was something stuck in my throat. I had to leave work early in the end as I was about to vomit. I did this on my way out! Having managed to get home I vomited again and still had these terrible pains (but not thinking for one minute that it was a heart attack). When I got home, luckily my 13-year-old daughter, Amy, was there. She sorted out her 11- and four-year-old brothers and then came upstairs to check on me. I was lying on my bed and shortly after she came into my room I became unconscious. She called for an ambulance and was very brave. I came round a few minutes later and jumped out of bed and promptly vomited. The pain had gone and I told Amy I didn't need an ambulance. When the paramedics arrived, they did an ECG which was negative, and did the usual observations. The only thing not normal was my blood pressure, which was slightly high. They advised me to still get checked over. On arrival at A&E I was sat in the main waiting room. They did a further ECG and took routine bloods. Approximately 2 hours (or longer) I was suddenly rushed to the resus area. My husband and I were confused. We asked the nurse what was going on and she said my troponin levels were raised. The A&E doctor arrived and he literally blurted out: “You've had a heart attack, oh and we're not sure but your aorta may have torn.” I was in complete shock. I vaguely remember muttering “You've got the wrong blood results for me!”

I was a fit 43-year-old woman who ran twice a week and saw a personal trainer. I have no markers for heart disease. I spent five days in hospital and it was only when my cardiologist sent me for an angiogram that SCAD was diagnosed. He was very understanding but had no real knowledge of SCAD, although he was aware of it. After my eight-week check-up I then went on Facebook trying to find someone else/a group who had been diagnosed with SCAD. I initially found the American group but then got in touch with Beat SCAD and the UK Facebook group. I was desperate for answers and reassurance. I didn't think to ask my GP to refer me to the research led by Dr Adlam, so I kept ringing and left several messages until I got my research day confirmed. I had the research day in the April 2016 with Dr Abi Al-Hussaini and nurse Ellie. They were absolutely amazing. By the end of the day Dr Abi confirmed that all my blood vessels and my heart had fully recovered and that there was only a small amount of damage left.

Beat SCAD, the UK charity supporting people with Spontaneous Coronary Artery Dissection (SCAD), is holding its third Conference on Saturday 9 June at the Queen Elizabeth Hospital, Birmingham, where SCAD researchers will present their latest findings. Patients will also be able to ask questions and talk to SCAD experts.

It was the afternoon of Thursday August 14th 2014, my children, all under 12, were playing as we were in the middle of the summer holidays. My mother in law was watching TV and I was doing housework.

On 15th April 2015, I suffered what turned out to be the first of three heart attacks over a period of 12 days caused by Spontaneous Cardio Artery Dissection - SCAD. The first heart attack went completely undiagnosed, the second just 4 days later occurred when I was a long way from home in Liverpool and it was there that the Cardiologists diagnosed SCAD, the third happened 3 days after I returned home, in the middle of the night. It was the worst of the three and a very frightening experience not just for me but also my husband who called the ambulance and followed me to hospital.

The accumulative impact of those 12 days is now very hard to put into words. I was very frightened, very confused, physically very weak and emotionally extremely fragile. And perhaps more than anything I didn’t really understand what had happened or why.