Find out more about our team and the work we do at the University of Leicester.

Here you will be able to learn about SCAD and read the stories of others who have suffered from this condition.

Our team at the Leicester Glenfield hospital is funded by BeatSCAD and from public donations and have previously received funded from the British Heart Foundation and NIHR Rare diseases Translational Research Collaboration.

Dr David Adlam is the chief investigator for our research. We aim to investigate:

We are extremely grateful to SCAD-survivors, their family and friends who have generously donated or raised funding to support our research

If you would like to contribute to SCAD research then please donate at ourjust giving page.

The ambulance snaked through the traffic with the deception of apathy. I knew it was dodging cars at full pelt, but the 20-minute journey seemed to take forever. The paramedic busied himself with an in-journey ECG which could be sent wirelessly ahead to the ER department of the local district hospital. Both he and the driver were stumped and their confusion, and concern, was palpable.

They were having to deal with one of the rarest forms of cardiac events, although they weren't to know that until hours after. The patient was a 35-year-old professional woman, slim, apparently fit and healthy, dying from a heart attack in front of them.

I had my first SCAD event on 11-Apr-2013. I was 50 years old and had been back to full time work for two months after suffering from severe depression. So was feeling really good, had lost weight and was fitter than I had been for years.

I had been busy at work that morning and I was making a cup of tea at lunch time. While talking to a colleague I started to feel unwell. A real aching in my jaw and a bit lightheaded. I went to my desk and sat down. But I started to feel worse...pain radiating in my shoulders, nausea. So as I thought I was going to be sick I went to the toilet. 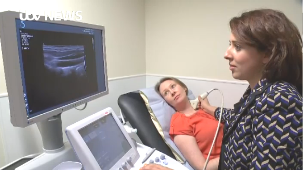 In a recent report ITV news have covered the story of Rebecca Breslin, a SCAD survivor who has, through tremendous effort, has collaborated with the University of Leicester to help initiate a research programme. Launching on 29th February, the new study aims to gain insight into the underlying mechanisms behind spontaneous coronary artery dissection. A better understanding of this disease may help to prevent recurrence, which is a major concern for those who have suffered a SCAD.

I had chest pains in the morning of 28th October 2013, a couple of days after quite a tough run. I then carried on as normal through the day with no other pain. That night I was woken up with worsening pains in my chest. I tried to adjust my position so that I could go back to sleep, but the pain increased until I was on the floor. My wife took me to A&E where the Troponin test showed I had had a heart attack.

I was 40 years old at the time and was fairly fit, although I had some form of Post Viral Fatigue since the March of 2013 (underactive thyroid due to the flu getting into it - or something like that).

I am a 41 year old nursery nurse and I had my SCAD on 6th November 2013. It came completely out of the blue when I was at my work. Apart from mild asthma years ago, I had no previous health problems. One minute I felt fine, the next minute I felt nauseous, warm and faint.

I tried to carry on as normal for a few seconds before experiencing extreme crushing chest pain. I sat down feeling dreadful and confused as to what was happening and then the chest pain subsided not long after. My work colleagues were brilliant with me and remained very calm. I do remember someone saying I looked grey and maybe it was a panic attack. I then sat down for a while and felt much better but decided to go home early.

I had my first SCAD heart attack January 2014, I was in Denmark on vacation and preparing my luggage to return to Italy, when I felt a strange feeling in my chest (no pain) and that my left arm “fell asleep” it only took a few seconds, and then disappeared but something told me to react so we called 911 to ask what to do and they send an ambulance right away. In the hospital they took 2 blood test (12 hours one from the other) for enzymes but both turned out negative, also EKG was perfect, and I felt “normal”.

So as we had to return to Italy they decided to let me go, but told me to contact the hospital for a cardio stress test when back home. (Later I experienced that in Denmark they do not know about SCAD, maybe because we are not in many?).

I am a 42 year old gastroenterology nurse specialist, wife to Gary and mum to Millie (8) and Archie (5). I considered myself reasonably fit and well: non smoker, no medication, no risk factors in myself or family.... except perhaps carrying a few pounds too many and enjoyed a glass of wine or two (still do!). I had taken up running in August 2013, ironically to improve my fitness and to lose some excess pounds. I was really enjoying it, totally had the running bug and regularly ran three or four times a week, at least 5k each run.

On Monday 4th November 2013, I was out on a 6.5k run with my running club. I was into my 5th k on a reasonable incline when my chest felt really tight and hot and I was struggling to run. I just thought it was because I was breathing hard and it was really cold that night - minus 1. I carried on running and both my arms felt really heavy and dead, but I excused that as being short of oxygen due to running. I then had to stop at the side of the road to be sick as massive waves of nausea came over me. I tried to walk for a bit but that actually made me feel worse and I just wanted the run finished so just walked/ran the rest of the run.

Wednesday 2nd May 2007 I was walking our dog with my husband when I felt pain and pins & needle like sensations down my left arm. I said to my husband, I'm sure I have just had a heart attack and he said I'm sure you would know!

The next day I went to work feeling very tired and slightly breathless but I didn't link this to the previous day. I was laughing when I experienced tremendous pain which radiated down my neck and back; I could not lift my arms; I knew something was wrong but didn't know what, I felt like I needed to burp so drank a glass of milk and thought that helped but as I went upstairs I felt a strong pulling feeling under both arms. This went on for 2 hours intermittently and I knew I needed to get checked out.

At the age of 37 I had 2 episodes of a heart-burn pain which travelled down my left arm and the second of these was while I prepared to go to an aerobics class. I felt a fluttering under my rib cage, and fear led me to phone 999.

I was taken by ambulance to hospital where a blood test revealed a problem, possibly a blood clot on my lung and I was told I would have to stay in. As soon as I was told this, the pain returned but this time far worse, with pain in both my arms, my chest, neck and head. Doctors looked on bemused as I was young and healthy and they told me it was stress I was feeling!

My SCAD happened 20 February 2012. We were on holiday in Canada visiting family and combining our trip with skiing. First resort, great family fun was had, and then moved on to Sun Peaks for next ski adventure. Skied again for two days feeling fine. The evening of the 19th I felt a bit off so retired early. Woke feeling fine and met my husband to photograph him doing some jumps, then we did a few runs together. Round two we went our separate ways. On my last run, about third of the way down, I started to have pains in my chest and lots of wind. I thought I had just skied too close after lunch. I have no tighten of chest or pain in arm. So I continued to finish the run. At the end of the run, I thought this is not right if this was indigestion it would be gone by now, so sought medical help.

In the medical centre my blood pressure was through the roof but ECG inconclusive so doctor said to be safe best to go to hospital. Due to complications I was airlifted as the road was blocked. In hospital a blood test confirmed a heart attack. As the hospital was in the middle of nowhere I had to wait till Wednesday to be transferred to a hospital two hours away for an angiogram... which showed a 60% tear of left coronary artery. Doctor said nothing he could do but leave alone and let it heal by itself. After a stay in hospital I was discharged and so a long journey home to UK.